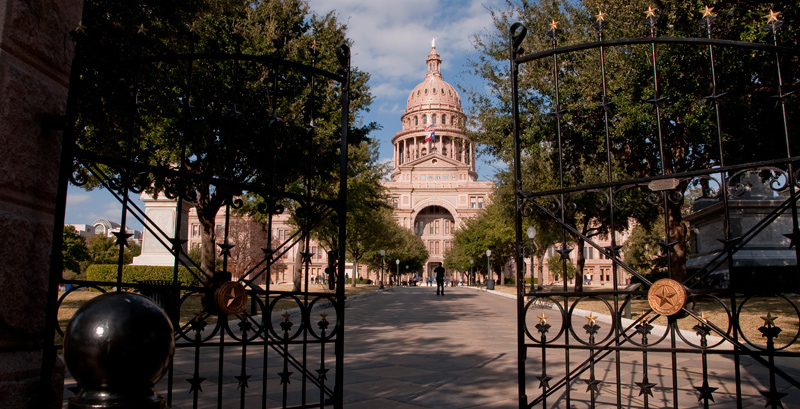 With candidates filing for the 2018 elections, and the Legislature apparently — finally — done for the year, I have updated my earlier ranking of members of the 2017 Texas House of Representatives and Senate. This includes votes from the regular session and from the summer special session, ranking lawmakers from most liberal to most conservative based on an analysis of 1,575 House and 1,831 Senate roll-call votes.

In the two charts, Republicans are indicated by red circles and Democrats by blue ones. The illustrations provide a mean ideal point for each representative and senator, referred to as the Lib-Con Score, along with the 95 percent credible interval (CI) for this point estimate. If two legislators’ CIs overlap, their positions on the ideological spectrum might be statistically equivalent, even if their Lib-Con Scores are different. The vertical dashed black lines indicate the location of the respective Democratic and Republican median Lib-Con Scores.

In addition, this table contains each representative’s Lib-Con Score and rank-ordered position on the Liberal-Conservative dimension, ranging from 1 (most liberal) to 149 (most conservative). The speaker of the House, Joe Straus of San Antonio, who by custom doesn’t ordinarily vote, is not included. The table also details the ideological location of each representative in relation to his or her co-partisans. In each party, every representative’s ideological location was compared with that of his or her party caucus colleagues and then placed into one of seven ideological categories going from left to right:

For example, representatives in the Less Conservative Than 1/2 category have a Lib-Con Score and 95 percent CI that locates them at a position noticeably less conservative than one-half (but not than two-thirds) of their co-partisans.

A similar table is provided for the Senate. Given the smaller number of senators, no Intra-Party Lib-Con Location column is included; the ideological differences are apparent.

Following the special session, the rank-order of the Texas senators from most liberal to most conservative remained identical to the rank-order after the regular session. There were no notable changes, either in the location of the 31 senators, or in the differences between their respective locations on the Liberal-Conservative dimension and the location of their 30 colleagues.

The next speaker of the Texas House

Following Speaker Straus’s surprise decision last month to not seek re-election, the Texas Tribune’s Patrick Svitek provided a list of 10 Republicans being mentioned as potential candidates to succeed Straus as speaker. At the same time, the Texas House Republican Caucus has signaled that it is likely to hold an internal vote to choose an official GOP Caucus speaker candidate. This move is not wholeheartedly supported by all Republicans, and would not — under current rules — be legally binding in the formal speaker vote that takes place on the House floor, although the political costs of defection could be substantial.

Ideological affinity is only one of many factors involved in the election of a speaker. But, to the extent to which ideology is a primary factor in the process, we would expect the next speaker to be closer to the median Republican representative (the two median Republican representatives in 2017 are discussed below) if truly chosen by the Republican Caucus and closer to the median House member (who, in 2017, was Republican Linda Koop of Dallas) if truly chosen by the entire House membership.

At the least conservative end of the spectrum are Travis Clardy of Nacogdoches (59), John Zerwas of Richmond (69) and Drew Darby of San Angelo (70). All three are located to the left of the House’s ideological median and have voting records that are notably less conservative than those of more than 2/3 of their fellow Republicans. Historical Lib-Con Score data indicate that this is also the ideological range in which Speaker Straus is located.

Next come two representatives who are to the right of the House median but to the left of the GOP Caucus median, Four Price of Amarillo (79) and Todd Hunter of Corpus Christi (94). Price and Hunter are, respectively, less conservative than more than one-half and one-third of their Republican colleagues.

The third group consists of two representatives who quite literally represent the GOP median, which is located smack dab in between the two of them, Phil King of Weatherford (102) and Tan Parker of Flower Mound (103). Both are notably more conservative than one-third of the GOP Caucus members.

Guns on campus are a lousy idea

The federal drug discount is a good idea gone bad