The sound of silence on abortion 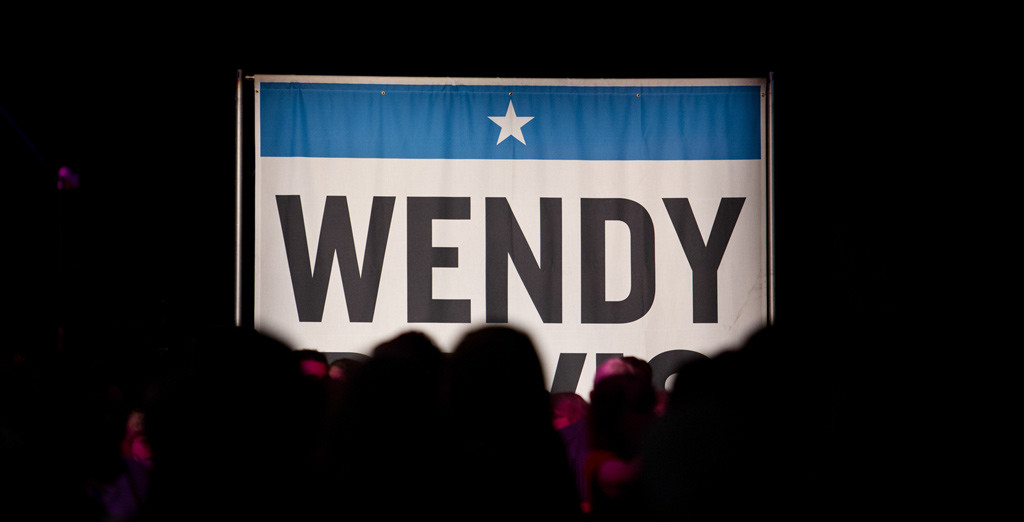 When it comes to abortion, Texans are pro-access with a very limited acceptance of choice for women as most people understand it, according to University of Texas/Texas Tribune polling data.

This landscape forms the terrain on which the gubernatorial campaigns of Democrat Wendy Davis and Republican Greg Abbott are unfolding. While common sense says Democrats don’t want to run a campaign in Texas on the issue of abortion, Abbott's vagueness on just how restrictive his positions are — particularly on exceptions for rape, incest and threats to a woman’s health — likely benefits him much more than Davis’ silence on the matter benefits her.

We wrote at the time of Davis’ 2013 filibuster that the policy that had garnered much of the media coverage up until that point, the 20-week ban, was not the likely cause of the long-unseen Democratic mobilization, because majorities of Texans expressed support for that provision. (Davis herself has subsequently suggested that she would have voted for it in isolation.) Her supporters were mobilized in opposition to other parts of the bill that promised to restrict abortion access (and have done so). In the same June 2013 survey showing that majorities supported the 20-week ban, 79 percent of respondents indicated that abortion should be allowed under varying circumstances (only 16 percent of respondents in Texas, as elsewhere, support an overall prohibition on the procedure). Thus, Davis’ reluctance to utter the A-word is not likely about her fear of a majority who abhors all access to abortion but rather a reluctance to provide further fodder for opponents who would attack her for her opposition to a bill that included a 20-week ban.

It’s little surprise that the most intense pressure on Davis is coming from those who wish her campaign ill. Republican partisans have worked overtime to reassociate Davis with opposition to the 20-week ban in an effort to define her not just as a liberal — a label that Republicans have tarred Democrats with for more than a generation — but also as an extremist on abortion.

If Davis’ silence on abortion is something of an open secret for these reasons, Abbott’s reluctance to clarify the specifics of his own positions on abortion is less apparent, but very real. Clearly adopting lieutenant governor candidate Dan Patrick’s well-publicized rejection of these exceptions would put Abbott — likely with much fanfare — well outside the majority opinion on the issue in Texas.

In our most recent University of Texas/Texas Tribune Poll, we asked whether a woman should be able to obtain an abortion under seven possible circumstances, from the woman’s life being in danger to the woman simply not wanting any more children. 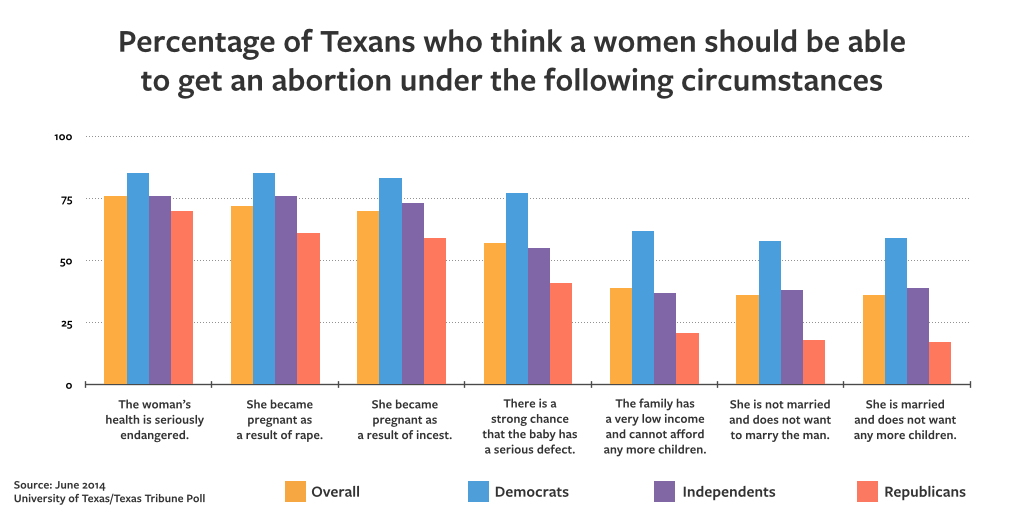 We found broad support — greater than 70 percent — for access to abortion when a woman’s life may be in danger or when the pregnancy was the result of rape or incest. While majorities of Republicans also support these exceptions, about 20 percent of Republicans regularly tell us that they oppose abortion under any circumstance. So any clarification by Abbott could potentially create a division within his base and provide ammunition for a future primary challenger — the prototype of whom is very much in the making. At the same time, any clarification that brings Abbott closer to Patrick’s position distances him further from the general electorate and gives Davis what she so sorely needs: a reason for some Republicans to vote for her.

But Abbott’s difficulties make for only the narrowest of political openings for Davis. Broad support for these abortion exceptions in tragic circumstances does not a pro-choice electorate make, certainly not in a literal sense of the word “choice.” In fact, under all of the circumstances in which a woman’s ability to exercise autonomous choice about a pregnancy was put to the test (for example, an unmarried woman who didn’t want to marry the man), Texans were much less supportive of abortion access.

These results highlight the difficulties that the abortion issue poses for Davis. While a clear rhetorical path that focuses on access to abortion when absolutely necessary exists and, in many respects, makes sense, to walk that tightrope would require a wholesale reconstruction of the politics that have defined the abortion debate for the last 30 years. But in the unreconstructed present, should Davis bring abortion back to the forefront, Abbott would no doubt reinforce support among his base — which is still large enough in Texas to win an election outright in the near term — by painting Davis as an old-school, pro-choice liberal.

Davis’ silence is nothing if not understandable — but also symptomatic of the campaign’s lack of options as it looks for ways to shake up the fundamentals of a race in which Republicans have so many advantages. But, in fact, it’s Abbott’s silence that offers the bigger advantage by allowing him to benefit from a status quo that has led Republicans to win every statewide office for the last 16 years — and enabled them to enact policies that reflect the preferences of their most activist voters.

A Libertarian's take on property taxes