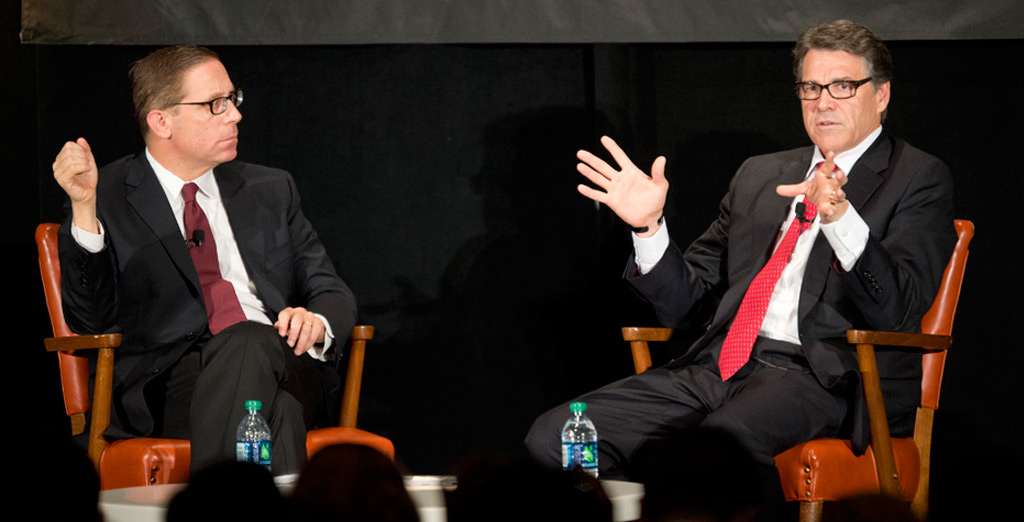 Given the spirited, high-level discourse that pervades The Texas Tribune Festival, it may seem like a dour move to look at public figures’ utterances there in the context of polling results.

On the other hand, given the fact that festival attendance is largely made up of stakeholders, policy wonks and (if you’ll pardon the pollsterism) those who are “extremely interested” in politics, public opinion polling provides helpful context for some of the action during the three-day event. Here are a few episodes from last weekend’s festival in which public opinion offered an interesting lens through which to view what was happening onstage.

1. Gov. Rick Perry chastises Tribune CEO and Editor-in-Chief Evan Smith for not asking about the border surge. A decidedly uncomfortable Q&A with the crowd included a question from a supporter of the so-called Texas DREAM Act seemingly skeptical of Perry’s continued commitment to in-state tuition for undocumented immigrants. A noticeably irritated Perry mentioned that no one, including Smith, had asked him about “one of the biggest issues that [he’s] been engaged with in possibly [his] entire political career” — the recent surge of law enforcement and National Guard troops at the border. Polling shows why the issue is a minefield for Republicans attempting to please their base without taking draconian positions likely to alienate Latinos and moderate GOP interests (read: business). In the last University of Texas/Texas Tribune Poll, nearly three-quarters of Republican voters favored deporting illegal immigrants immediately. And the issue can’t be sidestepped, because 51 percent of Texas Republicans cited either border security or immigration as the most important problem facing the state. In political terms, Perry’s border surge was a masterful move, and he has received praise for its shrewdness from allies and even some critics. So it’s no surprise that the governor — who is attempting to gain ground on his potential rivals, especially U.S. Sen. Ted Cruz, in the 2016 GOP presidential primary pre-campaign — was irritated that no one asked him to expand on his border security actions and then pivoted in that direction when asked about immigration.

2. Cruz doubles down on opposition to the Affordable Care Act and in-state tuition for undocumented immigrants. While neither of these is exactly news, Cruz’s opposition to the DREAM Act is particularly distinctive in Texas, where Republican leaders have been wrestling with the issue for some time now. But there’s much more of a consensus among Republican voters, 61 percent of whom oppose in-state tuition for the “DREAMers.” Opposition increases to 68 percent among Tea Party identifiers. Less controversially, Cruz is also on the side of the angels in the eyes of the Republican base in his steadfast opposition to all things ACA: 88 percent of Texas Republicans view it unfavorably.

4. Together but separate, Leticia Van de Putte focuses on persuasion while Dan Patrick goes for mobilization. Since a deal couldn’t be struck in which the lieutenant governor candidates shared a stage, attendees were forced to evaluate them in splendid isolation from each other. Van de Putte, the Democratic candidate, clearly knows what’s popular across party lines and is seeking to exploit that in an attempt to woo some Republican defectors. Education holds the most promise on this front — particularly test reduction and statewide pre-kindergarten, two subjects on which Van de Putte has been particularly vocal. Patrick, on the other hand, just needs to let Republicans show up and vote, and seemed focused on debating the efficacy of spending money on “inner city” schools. While Patrick enjoys a net favorability rating of plus-32 among rural respondents and plus-18 among suburban respondents, his net favorability among urban respondents was minus-6 in June. It’s an open question whether he’s trying to appeal to those inner-city voters with his attention to their needs or whether he’s actually invoking a contrast to bolster his appeal among his decidedly non-urban base of support.

5. The center holds some places better than others. While watching former U.S. Sens. Bill Bradley and Kay Bailey Hutchison, former presidential candidate Jon Huntsman, former U.S. Trade Rep. Ron Kirk and Atlanta Mayor Kasim Reed have an interesting talk about a return to a form of politics in which deal-making — compromise, in polite company — is more the norm than the exception, it was hard not to think about one number: 22. That’s the percentage of Texans who would vote for the Tea Party in a hypothetical three-way congressional election with a Democrat and a Republican in the mix. Twenty-two percent is two points more than the hypothetical Republican candidate, and tells us why the “center” is further to the right in Texas. More subtly, there’s a lot of passive acceptance of the forces in the GOP who see compromise as anathema to true conservatism: 78 percent of Republican voters think the Tea Party has either the right amount of influence (30 percent) or not enough influence (48 percent). That doesn’t make for a lot of holding capacity for the vision of the center on display among the elites on stage. Our guess: Their view has a lot more gravitational pull among the wonks, political junkies and, well, insiders who make up the bulk of Tribune Festival attendees and panelists than it does among the primary voters currently at the epicenter of Texas politics.

Why Texas women have turned away from Democrats