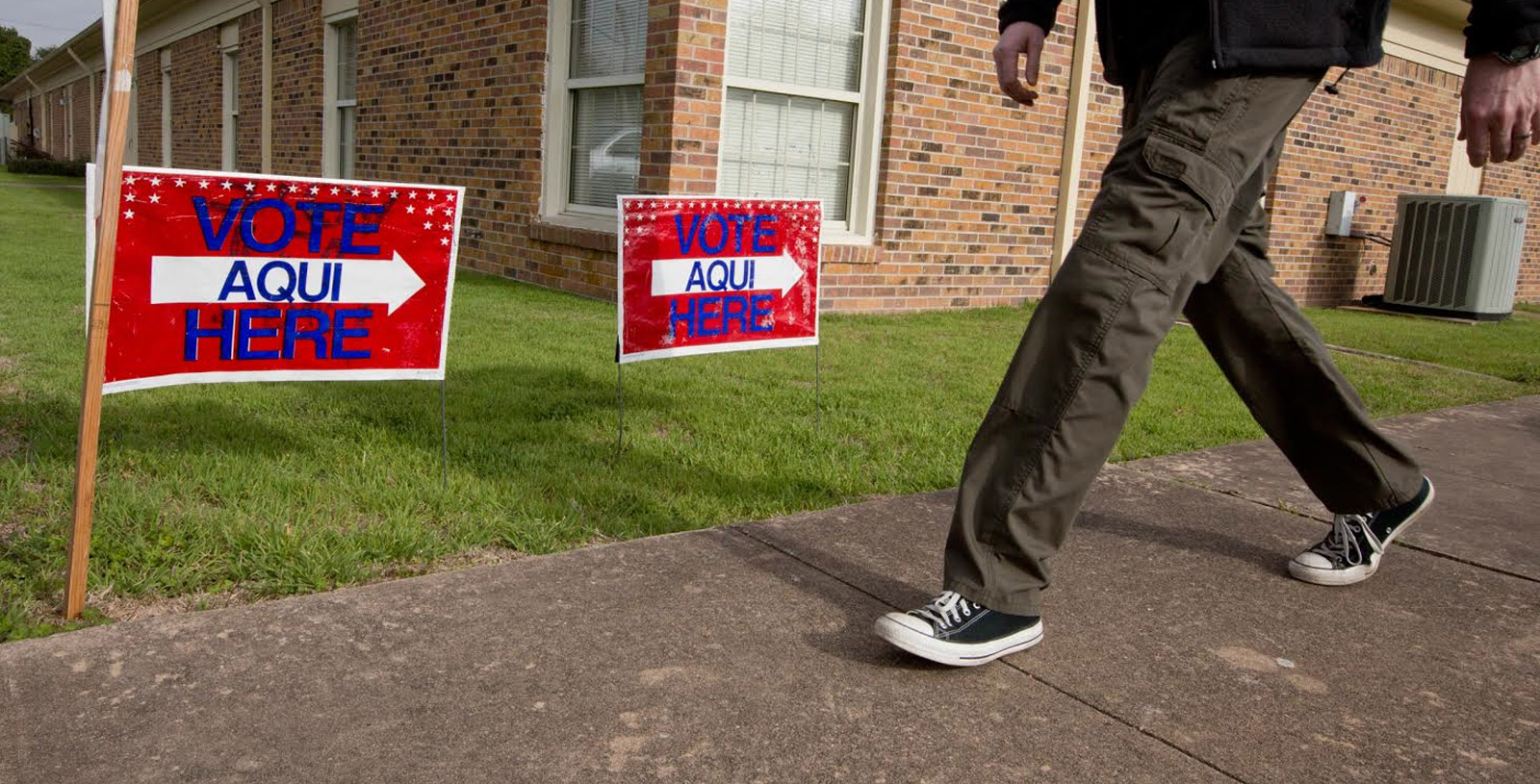 As we enter the homestretch of the 2014 election season, voting behavior by race and gender has moved to the forefront in the Texas gubernatorial race. Republican front-runner Greg Abbott’s campaign is counting on continued strong support among Anglos and men and a respectable showing among Hispanics. Democrat Wendy Davis’ campaign hopes to make significant inroads among Anglos and women and boost turnout and vote share among Hispanics.

Data from gubernatorial elections since 1990 underscore the uneven electoral playing field on which Davis is competing against Abbott. While copious amounts of ink and bytes have been devoted to the Texas GOP’s “Hispanic problem,” less attention has been paid to Texas Democrats’ more consequential “Anglo problem.” Since 1990, no Democrat in Texas has come close to winning a majority of the Anglo vote — a problem for the party given that among Texans who vote in gubernatorial races, Anglos still outnumber Hispanics by more than 3-to-1. And while Democratic gubernatorial candidates have performed better among women than men over the past 20 years, no Democrat has won a majority of the female vote since 1994.

A forthcoming Baker Institute report on Texans’ voting behavior employs data drawn from the national exit polls conducted concurrently with the six Texas gubernatorial elections held between 1990 and 2010. This analysis looks at the distribution of the two-party vote (Democrat-Republican) across the three principal ethnic/racial groups in the state and between women and men.

Excluding the 2006 election, the Democratic and Republican candidates combined to win an average of 98 percent of the vote in the gubernatorial races between 1990 and 2010. In 2006, the presence of two high-profile independent candidates, Carole Keeton Strayhorn and Kinky Friedman, reduced the combined Democratic-Republican vote share to 69 percent. Fortunately, the 2006 exit poll also queried Texans on their vote choice if the race had been limited to Democrat Chris Bell and Republican Rick Perry, and the results from that question have been used here.

Anglo voters have been, and continue to be, the dominant ethnic/racial group in Texas elections. Anglos’ proportion of the vote in gubernatorial contests, however, slowly declined during this period, from a high of 77 percent in 1994 to a low of 67 percent in 2010. Since at least 1990, an absolute majority of Anglos have backed the Republican gubernatorial candidate, ranging from a low of 57 percent in 1990, when Democrat Ann Richards won 43 percent of the Anglo vote en route to her victory over Republican Clayton Williams, to a high of 78 percent in 1998, when Republican George W. Bush trounced Democrat Garry Mauro. Most recently, Perry won 71 percent of the Anglo vote in his victory over Democrat Bill White in 2010.

The Hispanic share of voters in the gubernatorial elections has risen from 11 percent in 1990 to 17 percent in 2010. Overall, while Democrats have always won a majority of the Hispanic vote (albeit only by a nose in 1998), Republican gubernatorial candidates in Texas have outperformed their counterparts in many other states among the growing demographic. The Republican candidate has won between a fifth and half of the Hispanic vote in the past six gubernatorial elections, with Perry the choice of almost two in five Hispanics in 2010. In 2002, Perry soundly defeated Democrat Tony Sanchez. However, Sanchez received the support of almost four out of five Hispanic voters, highlighting the latent potential for a Hispanic Democrat.

Since 1990, African-Americans have consistently accounted for a little over one in 10 Texans who have cast a ballot. And with the exception of the 1998 Bush landslide, the Democratic gubernatorial candidate has received the support of between eight and nine of every 10 of these voters. 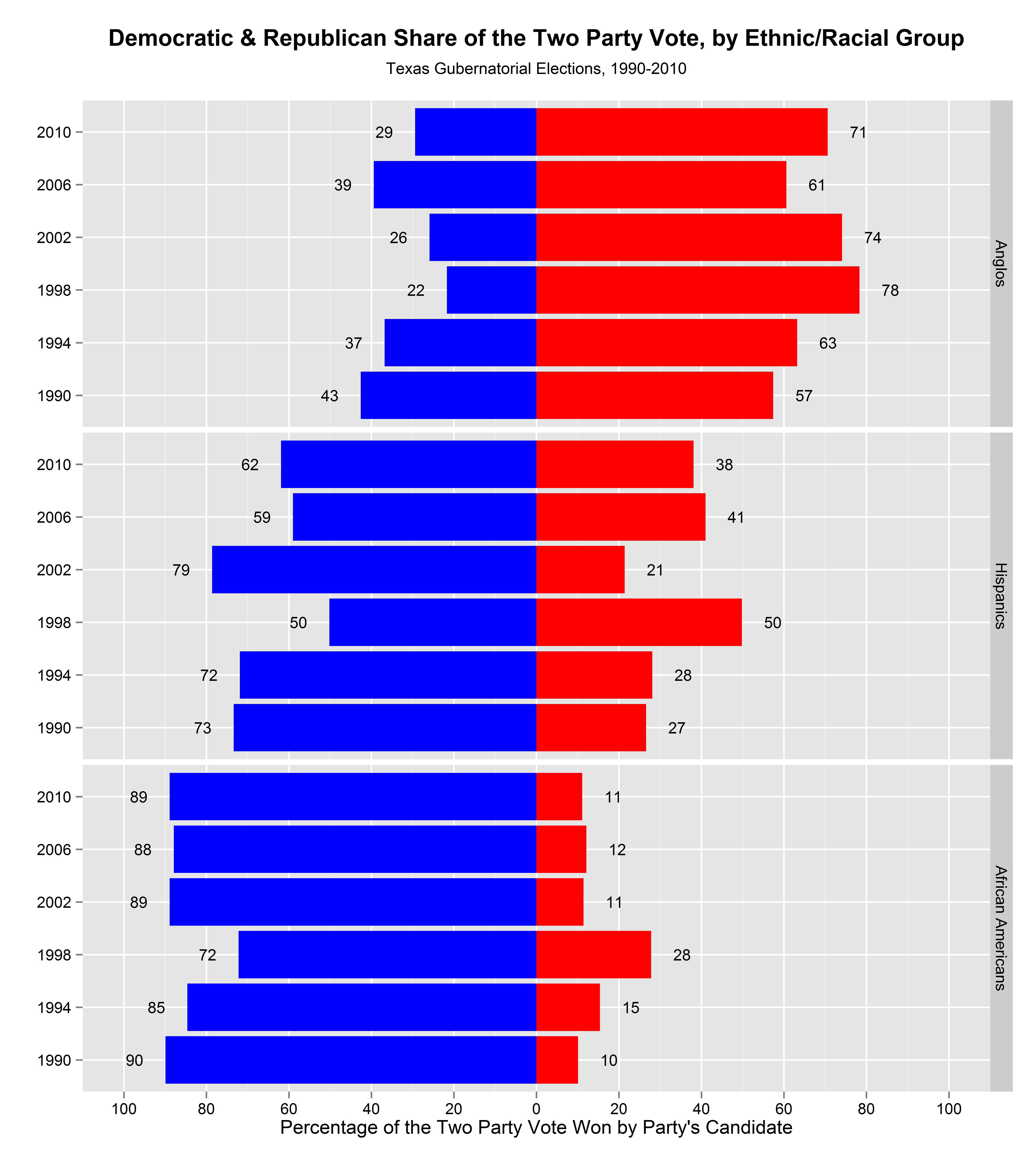 Davis is the first female major-party nominee for governor since Richards in 1994. Richards won a majority of the female vote in both 1990 and 1994, besting Williams by 20 points in 1990 and George W. Bush by less than half a point in 1994. Since 1998, the four (all male) Democratic gubernatorial candidates have been unable to secure the support of a majority of Texas women. However, the Democratic deficit among women has been smaller than the deficit among men.

Since 1990, the Republican gubernatorial candidate has always won an absolute majority of the male vote, with Perry in 2010 capturing the support of about six out of every 10 men. The gender gap in the 1990 Richards-Williams election was a massive 32 points, with Richards winning among women by 20 points and Williams winning among men by 12 points. That easily surpassed the largest presidential election gender gap (20 points in 2000) since 1972, when robust exit polls first became available. 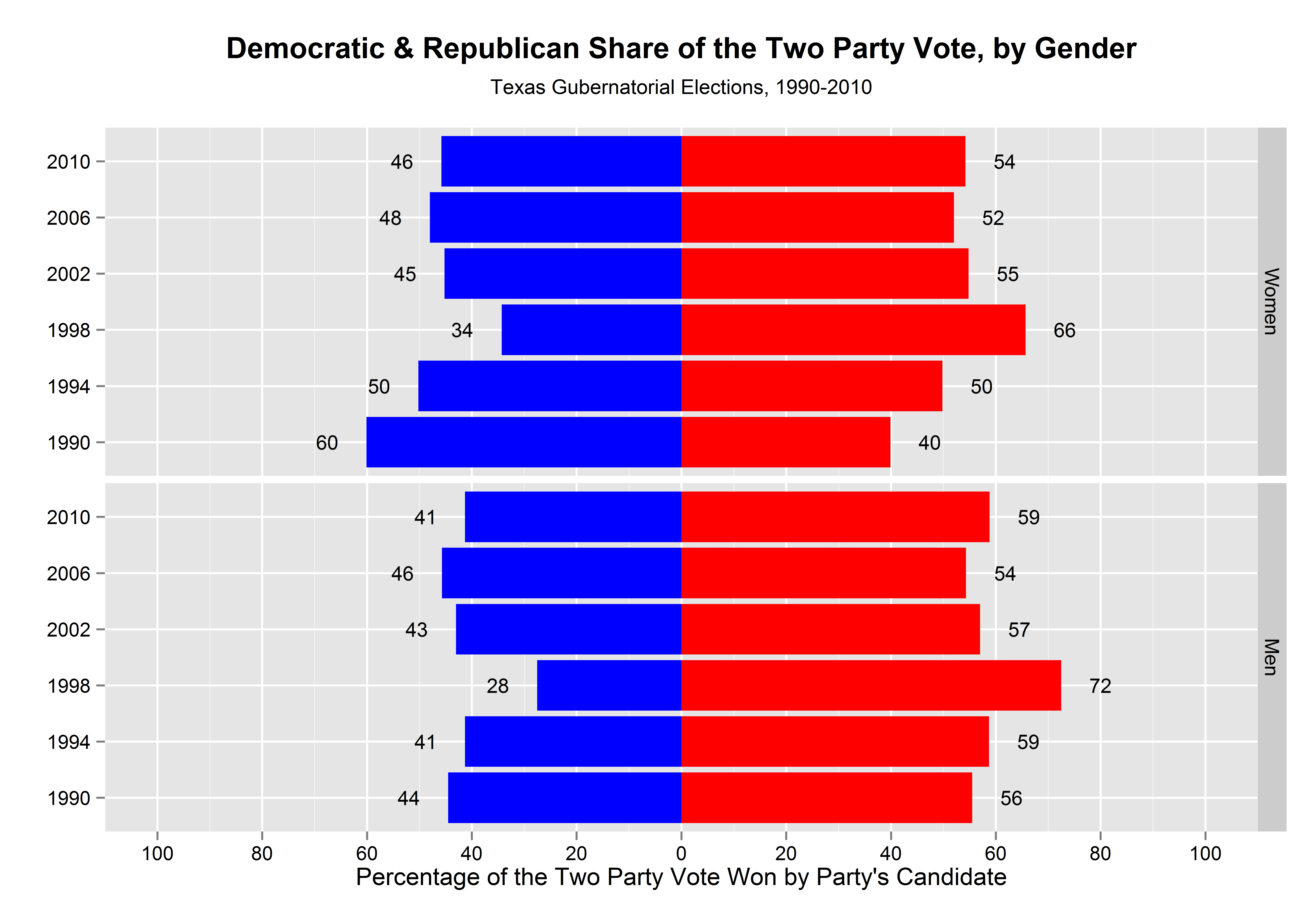 The Republican lock on the Texas governorship since 1994 has hinged on the party’s ability to win a Texas-sized share of the Anglo vote and the support of a respectable proportion of Hispanics. And unlike at the presidential level, where no Republican has won a majority of the female vote since George H.W. Bush in 1988, Republican gubernatorial candidates in Texas have enjoyed majority support among women since 1998.

Only on the evening of Nov. 4 will we know how successful the Davis campaign and groups like Battleground Texas have been in increasing the party’s share of the Anglo, Hispanic and female vote while ramping up Hispanic turnout. If their efforts prove extraordinarily successful, we could find ourselves staying up late into the night as results roll in. But if 2014 resembles recent elections, the race is likely to be called relatively soon after the polls close.

What Abbott and Davis' ads say about them