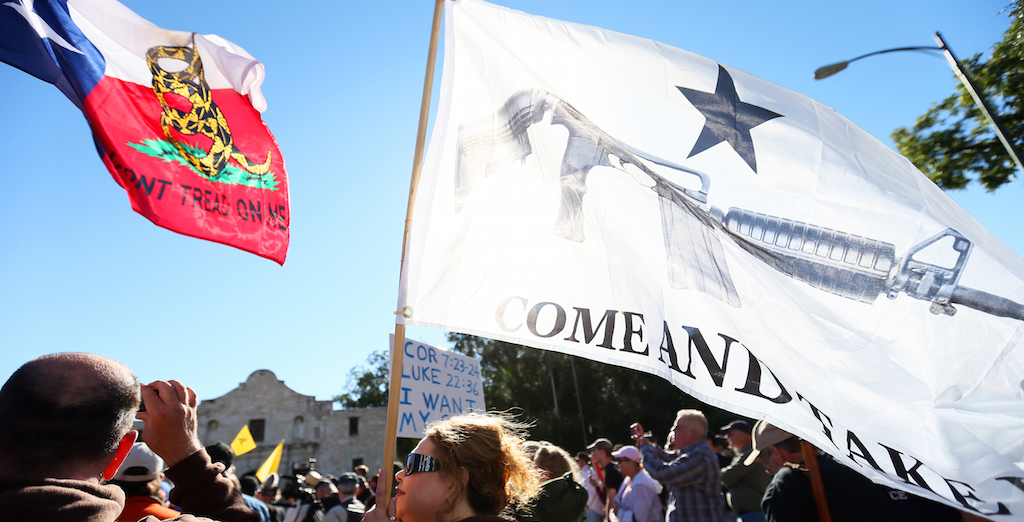 The political new year has begun much like the old one ended — to the sound of guns. More accurately, to the sound of the politics of guns. Nationally, President Obama’s frustration over the lack of congressional action on even modest attempts at gun control boiled over this week with an emotional speech and a list of executive actions, most notably tightening and expanding background checks for gun purchases.

Meanwhile, back in Texas, the open carry of handguns became the new normal as the much-debated measure passed by the 84th legislature went into effect on Jan. 1. Texas Republican elected officials waved the Second Amendment at the President with defiant outrage, seemingly an echo of the mood of their newly armed state. Gov. Greg Abbott said that Obama had “trampled” on the bill of rights. Lt. Gov. Dan Patrick assailed the President for “political posturing and more propaganda.”

The Texas political leadership’s rejection of both the substance and intent of the executive actions certainly reflects Texas voters’ embrace of gun rights, especially the sizable portion of those who identify with the GOP, after a legislative session that made Texas the most populous state yet to allow open carry. Nonetheless, polling suggests that the appetite for ever-more-lenient gun laws appears to have abated — at least somewhat — in the aftermath of measures passed by the last legislature that loosened restrictions on how and where guns could be carried. Nonetheless, the response of the Texas Republican leadership, conditioned by the politics of that session, has been to err on the activist side of the gun debate compared to the clearly evident currents of opinion in the state, even among broadly pro-gun rights Republican voters.

Heading into the 2015 legislative session, guns were clearly on the conservative agenda. Amid small but highly visible protests for “Constitutional carry” as the 84th Legislature convened, one of Lieutenant Governor Dan Patrick’s few political missteps occurred when he publicly suggested that open carry might not pass in the 84th session because of a lack of votes. The backlash was swift and severe, and the lieutenant governor walked back those comments faster than a speeding bullet.

And why wouldn’t he? In the February 2015 University of Texas/Texas Tribune Poll, though a plurality of Texans wanted to keep the state’s concealed carry law as is, 67 percent of tea party Republicans wanted to move the state in the direction of open carry, either with or without a license. When asked about gun laws in general terms heading into that session, 52 percent of Republicans wanted current gun control laws left alone, while 34 percent wanted them made less strict. Among tea party Republicans, the only major group pushing for open carry, a majority wanted the laws made less strict (54 percent). Only 14 percent of Republicans favored legalizing the right to carry a gun with no licensing at all, but a large share of Patrick’s most vocal constituency favored expanding licensed gun rights.

By November of 2015, after a session punctuated with partisan debate over gun rights and the passage of laws making it easier for Texans to carry their firearms openly, the percentage of Republicans who said that they wanted gun control laws made less strict had dropped from 34 percent to 26 percent. Among Republicans who identify with the Tea Party, a similar change occurred, from 54 percent saying that they wanted less-strict gun laws in February to 46 percent in November. Likewise, the percentage who said that they wanted the laws left alone had increased from 39 percent to 48 percent.

This data is not meant to convey that Republicans, and the most active wing of the party, has had a change of heart in their support of gun rights or started volunteering for their local chapter of Michael Bloomberg’s Everytown for Gun Safety; at the end of the 2015 session in the June UT/TT Poll, nearly three-quarters of Republicans (perhaps reflexively given earlier polling) said that they supported the licensed, open carry of handguns. Rather, the shifts in attitudes suggest that, as in so many other policy areas, they received much of what they had openly desired from the Republican-controlled Legislature and are now at least more comfortable with the (new) status quo than before the measures passed in 2015 (when the Legislature passed a “campus carry” bill, too).

Some have pointed out that the president’s executive actions are what Republicans have been calling for in the wake of recent mass shootings: Better enforcement of existing laws, not the creation of new ones. While true — the president possesses no legislative power — Obama’s actions do implement changes in the gun ownership regime, and in general terms, the status quo is currently the most popular position for Texas Republicans.

But setting aside for a moment these sensitivities to the the status quo and the Second Amendment, the messenger matters in shaping responses to these executive orders. Among gun rights proponents, President Obama has long been viewed by Republicans with what can charitably be described as suspicion, with lapses into outright paranoia – especially when it comes to gun rights. The predictable partisan patterns in the responses to the president’s latest actions reflect both familiar partisanship as well as the reinforcement of attitudes among those who support either broad gun rights or increased gun control, and those who support or oppose the President, respectively.

The immediate negative reactions to the president’s actions by Republican public officials from the state level all the way to the GOP presidential contenders have exploited partisan predispositions toward the president as they have framed his actions as a radical violation of the Second Amendment. Even before Obama’s actual announcement, a New Year’s Day tweet from Gov. Abbott’s account presaged the Republican response with a Texas flourish:

The president, in his speech, struggled valiantly, if assuredly in vain, to assuage these reactions by reaffirming his understanding of and commitment to the Second Amendment, putting the measures in the context of a widespread receptiveness to the current gun regime in the country, as well as the role of mental health issues in gun safety.

None other than the once-burned lieutenant governor signaled the likely futility of this approach, and the alternative political direction to be offered Republicans in Texas, in an effective filibustering national TV appearance on Meet the Press marking the implementation of open carry in Texas and in anticipation of the President’s announcement. With host Chuck Todd struggling to get a word in edgewise, Patrick repeatedly invoked an expansive interpretation of the Second Amendment and foreshadowed further legislative action to reduce barriers to gun ownership with the pronounced goal of seeing “a day when every American citizen can simply have a gun, and does not have to go through a long ordeal or pay a high price,” adding, “we’re going to address that in Texas as well — because it’s the right of every individual under the Second Amendment.”

Texas voters may not be currently clamoring for ever fewer restrictions on gun rights, but the political leadership is determined to deliver them anyway as proof of their commitment to defending their constituents’ rights from the depredations of the president. As long as this is the context of the gun debate, you’ll have to pry this issue out of their cold, dead Twitter accounts.

Greg Abbott's right about one thing: We should amend the Constitution

Sanford Levinson, Law professor and author of "An Argument Open to All: Reading the Federalist in the 21st Century"