The perils of primary election polling 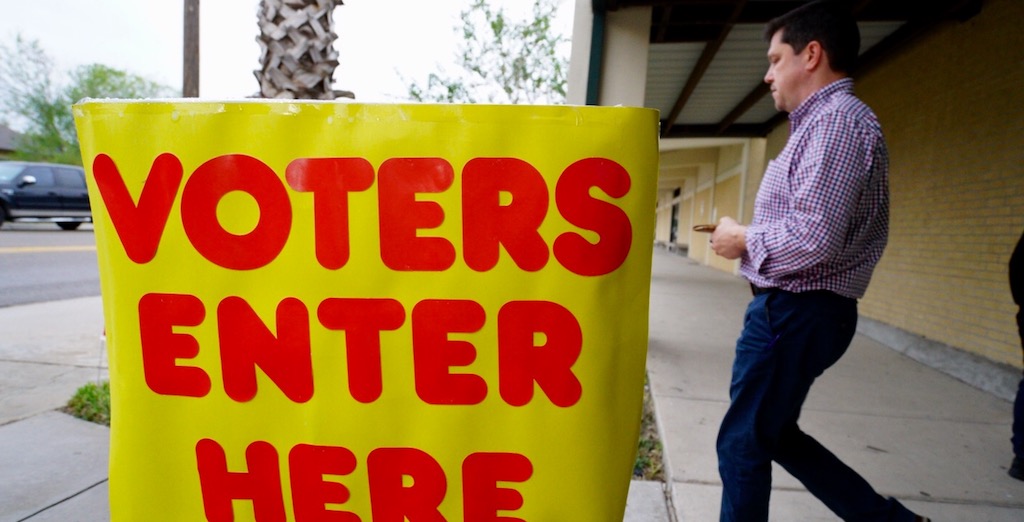 A voter leaves the polling station in Harlingen on Nov. 8, 2016. Photo by Reynaldo Leal for The Texas Tribune

With primary elections in Texas just days away, public opinion polling is inevitably seeping into the discussion of an unusually active political season. Campaigns are starting to release their internal polling in efforts to shape the news coverage and perception of races, and of course the University of Texas/Texas Tribune Poll will follow its more or less regular schedule and appear sometime prior to Election Day.

Purveyors of public polls like the UT/Texas Tribune Poll are once again faced with the unenviable task of providing context and (unfortunately) implied predictions about what’s going to happen in nominating contests for the state’s top offices. The popularity of Nate Silver’s FiveThirtyEight.com in 2008 and the concomitant rise of “data journalism” set political journalists on a path of sustained attention to polling and polling failures, a trend re-fueled by a handful of poor state-level estimates in the 2016 presidential election. The attention to polling is, on balance, a good thing, but the vicissitudes of polling on primary races make it all the more nerve-racking for public pollsters. For all the talk that now follows every election about the need to develop new techniques for measuring public public opinion and conveying poll results to the public, polling primary elections has always posed steep challenges.

Primary elections are difficult to poll accurately — and that will continue to be the case in the 2018 Texas primaries. Here are some of the major reasons for that:

Most primary candidates are relatively unknown. This is not always true, but it’s unusual to have more than a few races (for example, those for governor or U.S. Senate) in which there is at least one candidate with high name recognition. In practice, this means that many people enter the voting booth without well-formed attitudes about most or all of the possible choices. This confusion is, unsurprisingly, reflected in what respondents tell pollsters they’re going to do before voting starts. Ideally, these voters will simply admit that they don’t know or haven’t made up their minds when asked who they intend to vote for. In reality, when faced with a list of largely unknown candidates, some will instead choose a name only tangentially related to any developed intention. They might simply choose the name most familiar to them, choose a name based on some seemingly irrelevant characteristic (like alliteration, for example), or just end up choosing a name more or less randomly. Such shallowly-rooted decisions may turn out to have only a tenuous impact on how they cast their vote in real life: What they say to the pollster might not reflect what they do in the voting booth.

The size of Texas means that candidates running in the primaries, especially if they don’t already occupy statewide office (all of the Democratic candidates, for example), have an extremely difficult challenge in introducing themselves to voters in Houston, Dallas, Austin, San Antonio and El Paso — not to mention all of the places in between. On a smaller scale, the record number of congressional retirements and the cascade of candidates seeking either to move up from their currently held state or local offices into larger districts where they are less well known, or to jump into electoral politics for the first time, adds to the flood of political figures who are largely unknown to most voters.

Low voter turnout in primaries makes it extremely difficult to have reliable knowledge about who will vote in a given primary. In more academic terms, it is difficult to predict the composition of the primary electorate. Those voters who show up for primary elections tend to be unrepresentative of populations that we have reliable knowledge about, like the population of the state as a whole, registered voters as a whole, or even all partisans within the state (from sources like the U.S. Census, the state’s voter file, and/or multiple public opinion polls). They are only representative of primary voters — a definition that can change from one election to the next. The relatively small number of voters involved makes estimating their election preferences very challenging, and especially so in midterm election years, where turnout is even lower than in presidential years.

Texas’s unique characteristics exacerbate these problems. Texas has extremely low voter turnout across elections, but particularly in primaries. In 2014, 9.98 percent of registered voters turned out for the Republican Primary (1,358,074 voters) and only 4.12 percent turned out for the Democratic Primary (560,033 voters). This means that pollsters are looking to accurately measure the attitudes of an extremely small and constantly changing set of Texans.

The national political context of the 2018 elections presents its own set of challenges. Historically, a president’s party loses seats in the midterm elections, an oft-observed phenomenon that is nonetheless difficult to translate into state-level expectations about voting behavior. National polling suggests that Democratic enthusiasm is likely to outpace Republican enthusiasm in 2018, though how this translates into primary voting in 2018 is far from straightforward. Donald Trump’s historically low popularity for a sitting president at this point in his tenure adds another wrinkle, as do the polarized patterns of his partisan approval levels. The effect of historical trends in conjunction with the politics of the moment makes assessing the likely composition of the overall primary electorate even more difficult than usual, which in turn compounds the difficulty of estimating the preferences of the Democratic and Republican electorates in their respective primaries.

Democratic enthusiasm makes predicting the composition of the Democratic primary electorate more difficult. One factor in Democratic enthusiasm nationally is the intensity of Democrats’ disapproval of the president, which is manifest in his job approval numbers in Texas. In the October 2017 UT/Texas Tribune Poll, not only did 92 percent of Democrats disapprove of Donald Trump’s job performance, 84 percent strongly disapproved. For Texas Democrats’ hopes of any sort to be realized — from making slight gains as part of a long upward trajectory to actually winning some offices no one expects them to win — new voters will have to start showing up in the primaries to augur increased general election turnout. Since the most accurate election samples usually rely on surveying individuals with verified histories of participation and, in particular, previous primary election participation (obtained using the voter file, a state-provided record of who has voted in past elections, but, of course, not who they voted for), new voters are hard to fold into existing frameworks for sampling without a fair amount of guesswork. Polls can and do directly ask people whether they intend to vote, but people are notorious for exaggerating (to put it politely) about their past participation and overestimating their likelihood of future participation. People want to look like good citizens.

While Texas Republicans appear unfazed by the controversies of President Trump’s first full year in office, ambivalence may lead some otherwise consistent voters to sit this one out. Getting a good sample of primary voters becomes more challenging if a particular subset of voters who have reliably voted in past primary elections decides, for one reason or another, not to vote this time. In that same October polling, 78 percent of Republicans approved of the job Trump was doing, but that approval was comparatively less intense than the Democrats’ hostility: only 47 percent of GOP voters strongly approved of Trump’s performance. Mild contentment is unlikely to portend increased turnout.

Our view of how the attitudes of Republican voters are likely to shape the political mood in the Texas primary election is also murky due to the crosscurrents in national and state GOP politics. While Trump may or may not be a factor, Texas Republicans have also provided themselves with a set of state-level achievements distinct from Trump’s record, especially in the areas of immigration and border security, that they can invoke in campaigns if necessary. Some candidates are invoking their allegiance to President Trump, while others are finding it best to stick to what they have done for Texas (or what they are promising to do).  If one candidate is reminding voters of the Republican party’s ties to the president (for example, as Lt. Governor Patrick does in his first video spot) while others are ignoring him, these strategies may well send mixed messages to potential GOP voters, adding to the difficulty of gauging Republican enthusiasm and turnout, and, therefore, the composition of the primary electorate.

The raft of congressional retirements mentioned above also means that in many safely held GOP congressional districts, a large number of Republicans are running for these open seats. On one hand, this exacerbates the knowledge deficit of potential primary voters (the extreme example is the 21st Congressional District, to be vacated by a retiring Lamar Smith, where there are 18 Republican candidates). Lack of knowledge about candidates might be balanced by multiple campaigns rounding up votes and increasing turnout. This could have the double impact of making the primary electorate larger, but also made up of casual voters less certain about their preferences. Either way, predictions about turnout and electoral composition are difficult.

All of these factors converge to make primary polling for public consumption — fraught with uncertainty even under ideal circumstances — a difficult enterprise in 2018. The selected release of campaign surveys evident in recent weeks raises one last point about the different kinds of polling that circulate during campaigns. The differences between the origins and intent of the numbers campaigns released to the public, and polls intended to take nonpartisan, disinterested snapshots of primary races, gets to the heart of the matter by way of contrast.

Campaign pollsters work to strategically advance the goals of their clients. They attempt to both make an informed guess about what the electorate is going to look like while also estimating their preferences. They can, and often do, produce a number of educated guesses, decide in conjunction with the campaign team which guess seems most plausible, and proceed with a strategy informed by this information. Separately, campaigns may release one version of those estimates, often to influence news coverage or in an attempt to fundraise, or later still to show how excellent their polling was.

Public pollsters get no such wiggle room. The process is much more straightforward: Sample an electorate based on the best available information and best judgments about how to approach that estimate of likely voters, take respondents at their word, report the results, and then hope that those results offer an accurate reflection of what’s going to happen. At the heart of this exercise is a great deal of uncertainty — a condition of all polling, but one that especially defines primary election polling.

Texas educators should be teaching students to vote

Texas gets a 10-to-1 return on child support spending, but things could be better