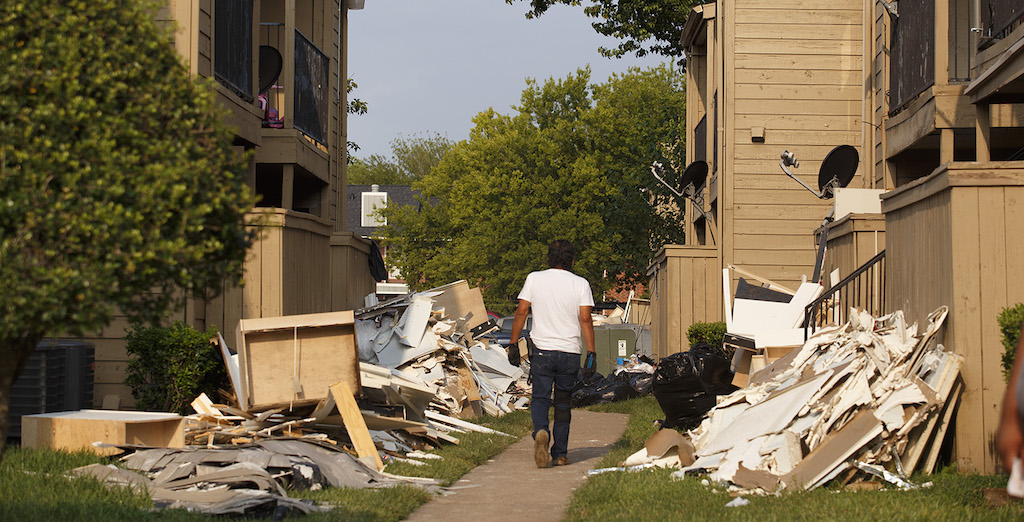 Nearly a year after Hurricane Harvey struck, Maria and Jessie Cuellar are faced with daily reminders of the damage that the storm caused to their home and their lives. The couple and their four children live in a Northeast Houston bungalow which remains in a state of disrepair from the foot of water that sat inside for days. As visitors pull up, they are greeted by a small pack of scruffy but friendly dogs, many of which Jessie took in after the storm.

“I just kept falling in love with them, and they don’t have anywhere else to go,” he says. The family maintains close ties with the community, even allowing a neighbor, Junior, to park his truck in their driveway each night because it kept getting broken into at his nearby apartment complex. Jessie hopes to leverage these relationships to repair the house, piece by piece, with support from his neighbors.

Over the past several months, we’ve gotten to know the Cuellar family while helping them replace their roof and put up new walls. Our organization, West Street Recovery, is a twelve-person grassroots organization that formed in the days after Harvey to provide direct assistance to our neighbors in Northeast Houston. Though we never expected to be doing this work a year later, we continue to meet families who have fallen through the cracks of an aid system that deepens inequalities that existed before the storm.

Like thousands of other families living in Houston’s poorest neighborhoods, the Cuellars have received insufficient assistance to recover from the storm. In Harris County alone, 37,561 households classified by HUD as “extremely low-income” experienced a FEMA verified loss, according to a Texas Housers analysis of FEMA data. But FEMA awards are rarely large enough to restore homes with low appraisal values to livable conditions, and low-income households are less likely to have savings and flood or homeowner’s insurance to cover the costs of repairs. This means that families like the Cuellars are reliant on a patchwork of charity groups and government assistance programs to fill in the gaps. A few local organizations stepped in to supplement the Cuellar’s small FEMA award with funds and labor, but a year later, the family is still living with moldy sheetrock and a leaking, sagging roof. Jessie worries that the roof will continue to deteriorate.

Before Harvey hit, the Cuellar’s roof already had a number of small leaks and the shingles were long-overdue for replacement. Over time, the leaks led to other problems inside the home, including water-damaged ceiling joists and studs. Maria and Jessie were aware of these issues but simply did not have the money to pay for costly repairs.

According to the Harris County Appraisal District, the Cuellar’s home had a pre-storm value of just over $23,400 Like many young, low-income couples, Maria and Jessie did not have good credit when they applied for financing and fell subject to predatory lenders. Instead of acquiring a traditional mortgage from a financial institution, they agreed to finance their home through the original seller with a sky-high interest rate of 11 percent, which put the total cost of the loan at $38,000. Exorbitant monthly interest payments make it nearly impossible to set aside money for the kind of routine home maintenance that higher-income homeowners take for granted.

To make matters worse, the terms of the family’s mortgage stipulate that the seller will retain the deed to the house until it is paid off in full. Even though they meet all other program requirements, this provision prohibits the Cuellars from receiving assistance from most rebuilding agencies. Because the experiences and perspectives of families like the Cuellars are absent from program and policy design, well-intentioned efforts often fail to address the bureaucratic stranglehold many households face both before and after disasters.

Recovery poses difficulties for any family, but the Cuellars face an additional financial obstacle that disproportionately affects Hispanic households, particularly those with undocumented or mixed household status: wage theft. Maria used to work at an indoor playscape in The Woodlands that declared bankruptcy when it still owed her outstanding wages of nearly $10,000. Bankruptcy laws ensure that she will not be paid anything until the case is resolved in court, and at best, she will get less than half of what she is owed.

Families in Northeast Houston and other neighborhoods like it continue to be neglected by a disaster recovery process that is as unpredictable as hurricanes themselves. Aid programs generally only supply enough funds to restore homes to “pre-storm condition,” which is a sensible goalpost for upper- and middle-class homeowners. But for the Cuellars, it was precisely the pre-storm condition of their home that made it so vulnerable to damage. To break this cycle, both government programs and private aid groups must reevaluate what “pre-storm conditions” really means for a family like the Cuellars.

Positioned at the intersection of class, racial and geographical vulnerabilities, the Cuellars illustrate the full scope of pre-storm conditions for families all over Houston. As the term is currently understood, “pre-storm condition” refers to the structure of the house itself — the beams, joists and shingles that hold up the home. There is no doubt that Houston will flood again, or that families like the Cuellars will have to navigate the recovery process again. In the short-term, NGOs and federal and state governments must improve and extend assistance for low-income communities who are disproportionately impacted by storms. But to create truly resilient communities, we need to amplify voices like the Cuellars’ and take stock of the complex forces that lead to deteriorating homes. By listening to the perspectives of families still struggling to recover from the storm and reshaping recovery efforts around their needs, we can make Houston into a more equitable and resilient city.

In the meantime, Jessie looks for the silver lining as he prepares to paint the new walls in his bedroom: “I think I’ll try blue this time. I never liked the beige anyways.” 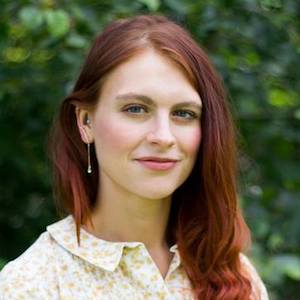 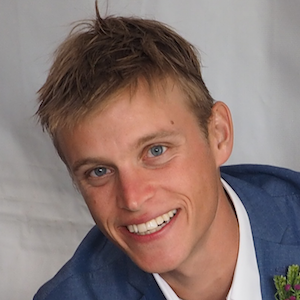 As the Trump administration turns its back on refugees, Texas stands ready to welcome them