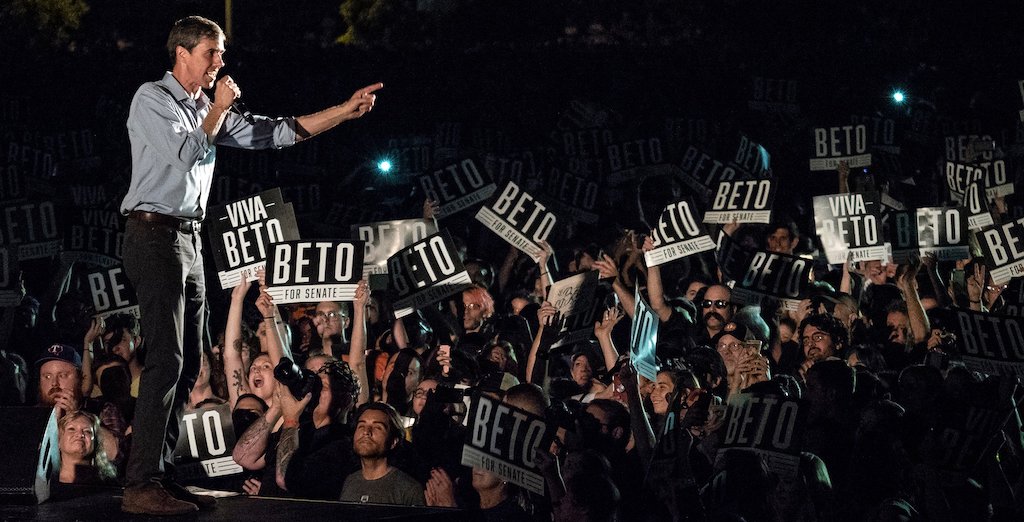 U.S. Rep. Beto O'Rourke, D-El Paso, speaks to supporters during the Turn Out For Texas Rally with Willie Nelson at Auditorium Shores in Austin, on Saturday, Sept. 28, 2018. Photo by Rodolfo Gonzalez for The Texas Tribune

While a truly competitive party system did not manifest Tuesday, there are signs that double-digit margins for Texas Republicans are numbered. If Democrats want to finish what O’Rourke started, they need to follow his lead. And if O’Rourke wants to secure a spot in the U.S. Senate, he should look to 2020 — and challenge Republican Sen. John Cornyn.

O’Rourke was part of a larger group of Democratic candidates contesting more races in 2018 than in recent memory, including every one of Texas’s 36 congressional seats. Two of those candidates, Colin Allred and Lizzie Pannill Fletcher, defeated two veteran GOP incumbents, Rep. Pete Sessions of Dallas and Rep. John Abney Culberson of Houston, respectively. Two other congressional candidates ran strong races and narrowly lost to Republican incumbents. These Democratic campaigns departed from the 21st century norm by being both well-funded and well-executed.

Two Democrats not running for reelection (Gene Green and O’Rourke) were replaced by Democratic political veterans, Sylvia Garcia and Veronica Escobar, the first Latinas sent to Congress from Texas. Democrats also flipped 12 of the 150 state House seats and two of the state’s 31 state Senate seats. O’Rourke attracted more than 4 million votes, a dramatic increase from the Democratic Senate candidate’s 1.6 million votes in 2014, and even improved upon the 3.9 million votes cast for Hillary Clinton in the last presidential election, which she lost by nine percentage points.

There are no guarantees here, of course. The Democratic Party will need to actively build on this by effectively using data from the millions of midterm voters, keeping good candidates who didn’t win engaged while recruiting more of them and, following O’Rourke’s example, starting their campaigns earlier. Candidates and Democratic consultants can learn from O’Rourke’s fundraising practices, and donors need to keep more money in Texas rather than shipping it to Democrats in other states.

Competition on the scale of a perennial toss-up state such as Florida will not happen overnight or appear in a linear fashion. Indeed, we shouldn’t expect a California-style collapse of the Republican Party in the state.

Republican assets in Texas are extensive, and their stakes are bored deep into Texas’s political culture, especially considering that it is home to many GOP presidential aspirants. Cruz’s narrow victory over O’Rourke was built on record-setting GOP midterm turnout, though Cruz (not for the first time in his career) fell short of matching Trump’s 2016 presidential election vote. Despite Democratic gains, Texas Republicans successfully defended majorities in the state’s congressional delegation and in both houses of the state legislature, as well as its monopoly on statewide offices. So the final outcome in Texas, however harrowing for those who had political near-death experiences, fell within the national pattern of red states, especially in the South.

But the Democratic surge in the state illustrates the potential for growth and, with apologies to O’Rourke’s family, an impetus for him to re-engage in Texas politics. O’Rourke was not the sole cause of Democratic turnout, but he certainly was the catalyst for bringing out Democratic voters usually dormant in midterm elections. He also raised a record-setting $69 million during the campaign without relying on contributions from political action committees. The party cannot afford to underestimate this source of practical political strength.

2020 is the obvious next step for O’Rourke. Cornyn has already announced that he intends to run for reelection. But he is one of the least popular top-tier statewide officials in Texas; in June 2018, before the Brett M. Kavanaugh hearings and the election environment gave his ratings a boost, his positive job approval among Republicans was only 46 percent, 28 percentage points lower than Cruz’s, according to a University of Texas/Texas Tribune Poll. Cornyn’s relatively soft support among the GOP base, coupled with presidential year turnout among Democrats, makes Cornyn appear less formidable in 2020 than Cruz in 2018. Should O’Rourke instead choose to exit the stage — or wait for the next round of elections for state government in 2022 — the assets Democrats gained this year may well dissipate.

O’Rourke may be the most valuable of those assets, and exciting as it’s been for Democrats in Texas and across the nation, even Betomania has a shelf life. If he wants to be part of the change he has talked about for the past year — change that would inevitably result in more real political competition in Texas — he’ll need to finish the job sooner rather than later.

Sponsor Content: There was a wave, and it was pro-public education