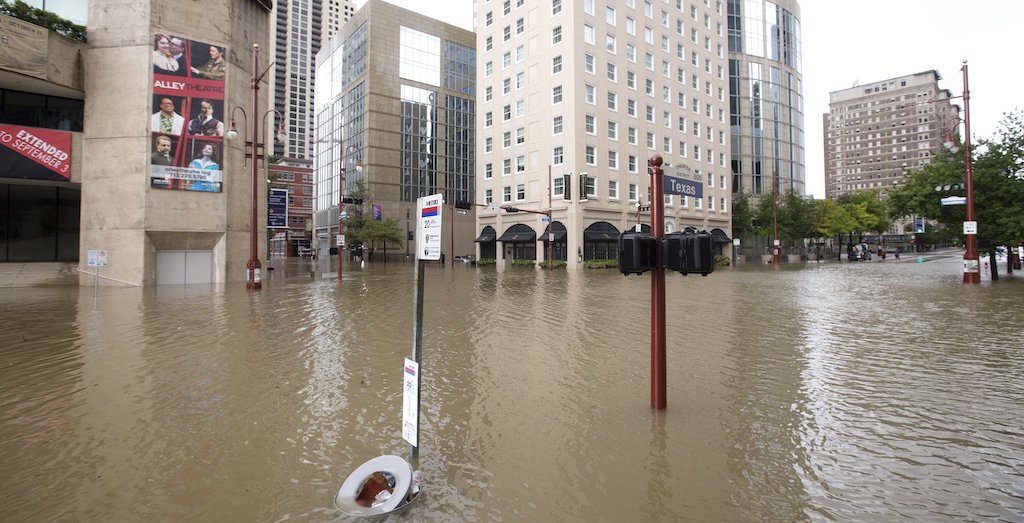 The Theater District in downtown Houston is flooded by water from Buffalo Bayou after it jumped its banks on Sunday, Aug. 22, 2017. Photo by Michael Stravato for The Texas Tribune

In late August 2017, Hurricane Harvey ravaged the Houston area with 1 trillion gallons of rain, enough to run Niagara Falls for 15 days. No other big American city has withstood such a natural disaster in modern times.

By and large, the nation’s fourth most populous city has bounced back from the devastation. But it wasn’t until this month that FEMA awarded the first set of grants for the design and construction of large-scale flood mitigation projects that could save thousands of homes and other buildings from flooding in the next hurricane catastrophe that is sure to come.

In other words, we have lost two precious years before starting work on projects that will take three years to finish: a massive floodwater detention facility at a former golf course; and construction of discharge gates at Lake Houston, our primary source of drinking water, to enable drawdown of lake levels in advance of a flood. We have proposed other projects that have received no federal funding so far.

A half year after Harvey, Congress appropriated $4.38 billion more in HUD community development block grants to the state of Texas for flood mitigation. It wasn’t until this month (Friday, Aug. 23) that HUD finally unveiled the guidelines for the use of funds.

It didn’t have to be this way.

I thank U.S. Sen. John Cornyn for pushing into law a requirement that such rules get published in the Federal Register within 90 days. But we shouldn’t need another act of Congress to get flood mitigation dollars that have already been appropriated.

Hope for Houston’s long-term resiliency also rides with the Reforming Disaster Recovery Act of 2019 by U.S. Rep. Al Green of Houston. It would permanently fund the housing disaster relief program, rather than requiring Congress to act the next time another big city survives two weeks of Niagara Falls-volume flooding.

U.S. Reps. Lizzie Fletcher, D-Houston, and Pete Olson, R-Sugar Land, filed the Hazard Eligibility and Local Projects (HELP) Act that recently passed unanimously out of the House Transportation & Infrastructure Committee. It aims to speed up the start of recovery projects after natural disasters, even during the wait for federal assistance through FEMA’s hazard mitigation grant program. Our local delegation is united in pushing for these reforms.

When our cause unites lawmakers from U.S. Sen. Ted Cruz, R-Texas, to Rep. Sheila Jackson Lee, D-Houston, it should not be so hard to put dollars to work now.

Reforming the federal government’s handling of interstate disaster recovery responsibilities will save taxpayers money, and perhaps relieve some of the physical and psychological pain of disaster survivors. The focus of recovery and flood hazard mitigation should be rapid project delivery, rather than current bureaucratic procedures of multiple audits.

Without reforms, another weather cataclysm in Houston in the next four years may destroy some of the homes that have been rebuilt since Harvey, leading to another round of billions of dollars in flood insurance and disaster relief claims from residents who might have been protected if our flood mitigation projects had been completed earlier. For now, we are stuck with what I call funding for failure.

In the meantime, we are investing in ourselves and changing ordinances to rebuild a smarter, more resilient city that is prepared to deal with more flooding. Over the objections of developers, the city council approved my proposal to requirethat new and substantially remodeled structures in flood plains be built higher above ground. Voters approved a $2.5 billion, 15-year flood mitigation program. Three months later they reauthorized a 20-year, $6 billion urban drainage improvement program, Build Houston Forward.

As vice chair of the Climate Mayors and a member of the C40 Cities Climate Leadership Group, I work with big city mayors around the world on limiting man-made global warming that might be making hurricanes like Harvey stronger than they would otherwise be.

And Houston sets an environmental example: 92% of the electricity used by Houston municipal government, here in the energy capital of the world, comes from wind and solar power. Our city has a new climate action plan, and we will soon unveil the nation’s largest urban solar energy farm.

I hope that with cities working together, we can have a “carbon neutral” nation in my lifetime. But with so many lives and so much property in the balance, reforming the federal government’s financial response to natural disasters could, and should, happen much sooner. 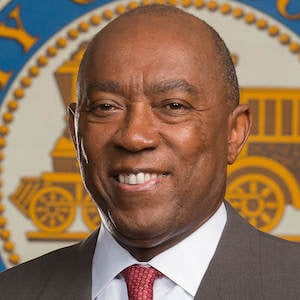