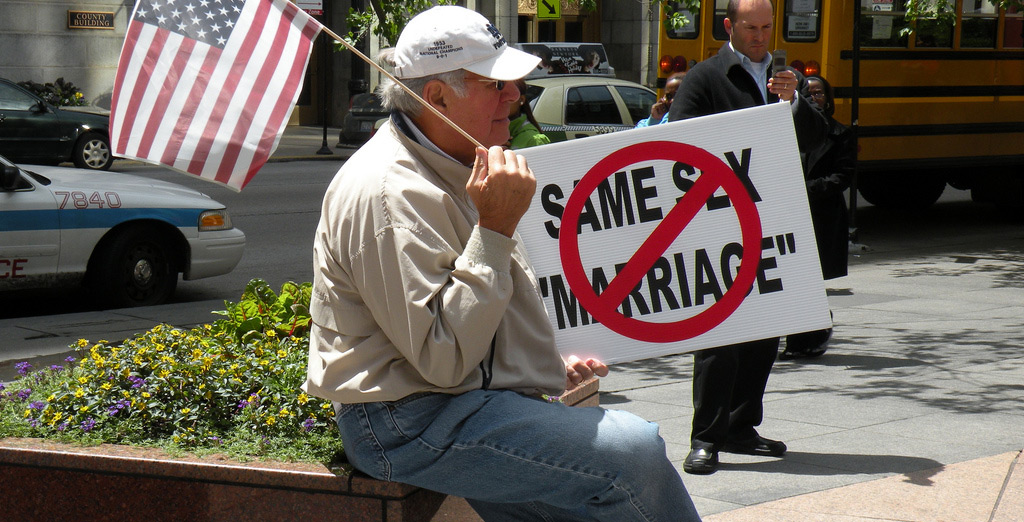 It’s been something of an anachronistic summer of gay marriage angst in the Texas GOP. The party has spent the season grappling with clear trends in public opinion that show growing support for same-sex marriage as gay rights increasingly come to be viewed as a matter of civil rights in the U.S.

However, a growing majority does not mean consensus, as the receptive audiences for the GOP’s periodic recourse to increasingly dissonant rhetoric illustrates. But neither does the existence of an intense minority mean that falling back into the conservative (dis)comfort zone of anti-gay positions serves the Texas GOP’s long-term prospects.

We’ve previously written about how Texans’ attitudes toward same-sex marriage have been shifting, especially among groups key to future elections. But the pace and generational unevenness of this change contribute to the much-discussed future of the Republican Party’s majority status in Texas. Despite the clear long-term trends, many GOP politicians only see the short-term hazards — like losing in a primary election — of shifting away from conservative positions on gay rights.

The tension between long-term trends and short-term risks for Republican candidates is apparent in the polling data. The last time we asked about gay marriage and civil unions, in the June 2013 University of Texas/Texas Tribune Poll, we found that 39 percent of Texans supported marriage rights for gays and lesbians while another 30 percent expressed support for civil unions. More important to the long-term prospects of the Texas GOP, 57 percent of 18-to-29-year-olds expressed support for same-sex marriage (along with another 25 percent for civil unions). In addition, in an increasingly urban state, 47 percent of respondents living in an urban area support gay marriage (along with another 27 percent supporting civil unions). And maybe most importantly of all, despite claims of Hispanics embracing Republican positions on social issues, 45 percent of Hispanic voters support same-sex marriage, with another 25 percent supporting civil unions. Among the large bloc of 18-to-29-year-old Hispanics, same-sex marriage support registered at 68 percent.

These patterns in public opinion are surely known to the state’s GOP, but that didn’t stop Gov. Rick Perry from comparing homosexuality to alcoholism (in San Francisco of all places), the Texas Republican Party from including an endorsement for “reparative therapy” in its party platform in June, or Attorney General and gubernatorial candidate Greg Abbott from filing a strange brief last week defending Texas’ 2005 ban on gay marriage based on the notion that state government has an interest in promoting responsible procreation. And Abbott’s brief turned out to be an exhibit in moderation compared with the amicus brief signed by 63 Texas Republican lawmakers, including lieutenant governor candidate Dan Patrick and attorney general candidate Ken Paxton, arguing that striking down Texas’ same-sex marriage ban might pave the way for pedophilia, incest and bigamy.

The problems facing the GOP in Texas are not unique to the state, but they’re particularly pronounced here. The Republicans’ long run of success in Texas has contributed to anemic turnout levels that leave the selection of issues and candidates in the hands of only the most engaged, partisan and ideologically extreme subset of the dominant party. Even if Democrats manage to tighten the vote margin in November, unless more moderate voices make their voices heard in the GOP primary and change the incentives for candidates, Republicans will likely be turning off large swaths of voters who will soon make up a majority of the electorate. The easy short-term response to this situation is to take solace in the fact that young voters tend to turn out in small numbers. But a chunk of today’s nonvoting slackers can be expected, eventually, to join the voting world. Voters certainly change their preferences over time, but where young voters begin their political maturation today matters for where they’ll end up tomorrow, and the Texas GOP can’t have young Hispanics coming into the electorate as a 70 percent-plus Democratic group and expect to remain competitive in the long run.

For the Texas GOP, the paleo-conservative tail seems to be wagging the dog on central issues like gay marriage, immigration and school funding, to name a few. Self-appointed guardians of the future of the Republican Party (think Jeb Bush) keep shaking their heads at rhetoric like that found in the Texas GOP platform, followed by semi-apologies and, finally, explanations from the likes of Perry (in the case of gay marriage, that he was really talking about states’ rights and neither condemning nor condoning “that lifestyle”). This dynamic is perhaps perversely apparent in U.S. Sen. Ted Cruz, who never offers any apologies for his positions and despite that, or as a result, remains wildly popular here in Texas.

But whereas the dog whistle used to be one tool in the GOP toolkit, Republicans in or seeking office seem to be increasingly in search of ways to send messages to their noisy minority constituency without rousing pushback from the press, the more genteel keepers of the GOP’s flame and, most importantly, prospective moderate Republican voters. Gay marriage seems but another symptom of the growing gap between the GOP as an institution with long-term interests, guided by elites whose job it is to remain alert to the viability of the brand, and a demographically shrinking and culturally embattled, but sizable, minority of the party base for whom the future is not something to be embraced — much less strategized — but feared.