The politics of choosing the wrong side of history 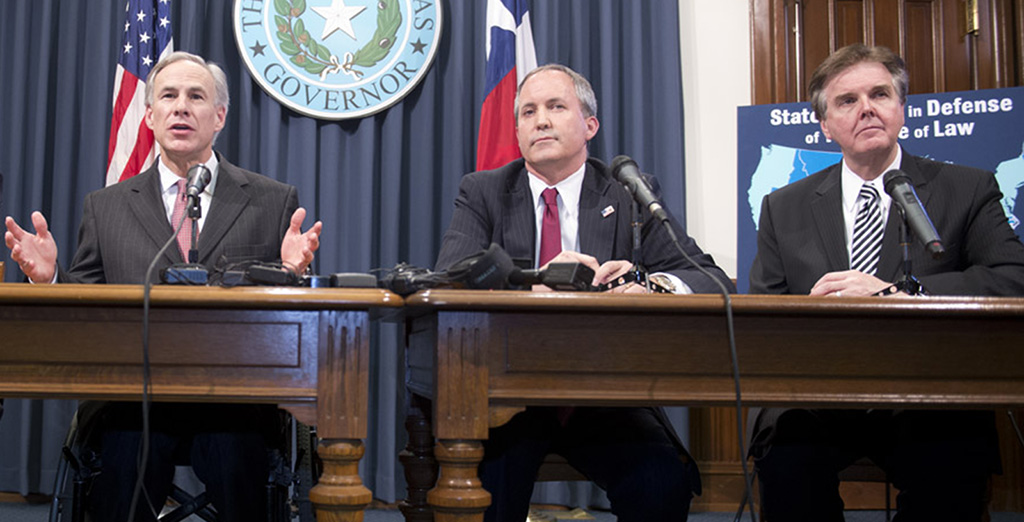 "I would rather be on the wrong side of history,” Lt. Gov. Dan Patrick declared in a statement condemning the U.S. Supreme Court’s decision last week to legalize same-sex marriage, “than on the wrong side of my faith and my beliefs.” Rounding out the reaction among Texas’ highest-ranked statewide officials, Gov. Greg Abbott and Attorney General Ken Paxton added their own invective against a “lawless ruling” by “an unelected nine-member legislature.”

These pronouncements quickly established the tone of the Texas Republican response to the court’s decision, even as Patrick’s nod to history recognized that polling trends — and, now, the law — continue to move toward widespread acceptance of gay marriage.

Yet in spite of the acknowledged direction of history, the vanguard of the Texas GOP knows where its voters are right now — and intends to remain right there with them. The June 2015 University of Texas/Texas Tribune Poll showed that the current state of public opinion in Texas provides plenty of short-term incentives for Republican officials to rail against federal court interference in decisions about group rights seen by their voters as better left to state government or individual conscience. While Republican attitudes toward gay marriage have shown some evidence of shifting over the life of the UT/TT polls, Patrick’s declaration that he is “not alone in [his] view in this country" is buttressed by recent data. When faced with a binary choice of supporting or opposing gay marriage (with no alternative in the form of civil unions, as we had asked in polls prior to 2015), a majority of Texas Republicans (60 percent) and Texas conservatives (63 percent) opposed it.

Responses to a different item in the poll illuminate the intersection of these attitudes. Texans were asked:

It turns out that more Texans (45 percent) think that businesses should be required to provide services than should be allowed to refuse them (41 percent), a finding that tracks closely with overall attitudes toward gay marriage. But again, among Republicans and conservatives, a majority (64 percent and 67 percent, respectively) think that businesses should be allowed to refuse services to gays and lesbians based on religious objections. At its core, this question asks whether or not sincerely held religious beliefs should be valid legal grounds for discriminating against gays and lesbians. Republicans, in significant numbers, answer affirmatively.

That’s why state leaders’ framing of gay marriage as a form of discrimination against Christians lands directly at the intersection of a set of attitudes — about gay marriage, discrimination and religion — held by their target audience. A look at cross-tabulations related to these issues shows how these attitudes intersect. Among Republicans who oppose gay marriage, 77 percent think that Christians face “a lot” or “some” discrimination in America today, and 79 percent think that businesses should be allowed to refuse services to gays and lesbians for religious reasons. These responses suggest a cluster of overlapping and reinforcing attitudes that coalesce into the belief that being required to respect legal protections for gay couples is tantamount to discriminating against Christians.

As much as state leaders have doubled down on rhetoric that reflects these attitudes, they’ve certainly hedged their legal responses. After all, this was the Supreme Court talking, not the editorial page of a big-city newspaper with declining circulation. Paxton declared to county clerks that they could refuse to grant marriage licenses to same-sex couples if their religious beliefs contradicted the practice — but also reminded them that they should expect to face litigation for their decision. In a similar vein, the governor directed state agencies to do all in their power to protect the religious liberties of their employees, yet a spokesman later clarified that “the governor’s directive does not authorize or order state agencies to deny benefits to same-sex couples.” Both used harsh language, but both also stopped well short of standing in the way of any gay couples looking to get married (at least so far).

This pragmatic response reflects awareness that the GOP’s electoral base is resistant to change, but also implicit acknowledgement of the inevitability of that change — and the legal force behind it. This harkens back to southern political leaders’ resistance to court decisions and other federal actions to end segregation in the 1950s and ’60s. Some of the governors most remembered for their resistance to desegregation — like Orval Faubus of Arkansas and, above all, George Wallace of Alabama — were later found to have resisted civil rights not just or even mainly out of heartfelt belief, but also out of a practical concern that they would be outflanked politically if they didn’t actively fight federal desegregation efforts. No doubt there are some differences between those sad chapters in southern history and the current pushback against the court’s decision on marriage. But then, as now, political leaders seemed inclined to follow the political requirements of the moment, even as they watched American history move decisively in the opposite direction.

It's time to divorce marriage from government