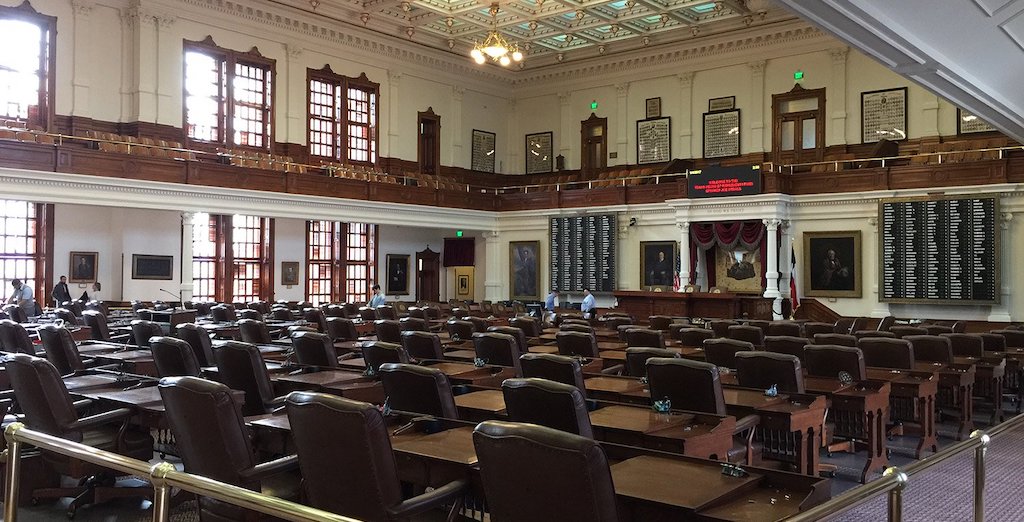 The Texas Legislature’s 2019 regular session is over, the votes on bills have been cast, and we have everything we need to rank Texas House members along the political spectrum from red to blue.

Political scientists have for decades used roll-call votes cast by members of the U.S. Congress to plot them on the Liberal-Conservative dimension along which most legislative politics now takes place. This ranking of the Texas House members does the same by drawing on the 1,166 non-lopsided roll-call votes taken during the 2019 regular session. As with previous rankings conducted in 2017 (post special session), 2017 (post regular session) 2015, 2013 and 2011, this one uses a Bayesian estimation procedure belonging to the family of methodological approaches that represent the political science discipline’s gold standard for roll-call vote analysis.

In the figure below, Republicans are indicated by red dots and Democrats by blue ones. In this analysis, each representative is given a mean ideal point, referred to as the Lib-Con Score, along with the 95 percent credible interval (CI) for this point estimate. If two legislators’ CIs overlap, their positions on the ideological spectrum might be statistically equivalent, even if their Lib-Con Scores are different. The vertical dashed black lines indicate the median location of the Democrats and Republicans. The representatives who are more conservative are located to the right of their party’s line, while those who are more liberal than the median are located to the left of the line.

In addition, this table contains each representative’s rank-ordered position, ranging from 1 (most liberal) to 149 (most conservative). House Speaker Dennis Bonnen, R-Angleton, who by custom doesn’t ordinarily vote, is not included here.

The 82 members of the GOP House delegation reflect a wide range of positions along the liberal-conservative spectrum. The delegation stretches from Briscoe Cain of Deer Park, Tony Tinderholt of Arlington and Mayes Middleton of Wallisville at one end, to Sarah Davis of West University Place, J.D. Sheffield of Gatesville, and Dan Huberty of Houston at the other.

Davis is the only Republican whose CI overlaps with that of any Democrats, overlapping with eight Democrats and zero Republicans. Her centrist profile is a natural fit for her purple district (HD-134), where a majority of voters identify with Davis’s fiscally conservative and socially moderate policy positions. Davis’s ideological congruence with her constituents is the principal reason why in 2018 she defeated her Democratic opponent 53.2% to 46.8% while the same HD-134 voters who propelled Davis to victory voted overwhelmingly in the U.S. Senate race for Democrat Beto O’Rourke over their neighbor, Republican Ted Cruz (who lives in HD-134), 60.3% to 39.0%. While Davis won HD-134 by 6.4%, Cruz lost HD-134 by 21.3%.

The Democratic delegation is not as ideologically diverse as its GOP counterpart, but does nevertheless contain a broad range of ideological worldviews. Gina Hinojosa of Austin, Ana-Maria Ramos of Richardson, and Jessica González of Dallas anchor the liberal end of the Democratic ideological continuum. The most centrist Democrat is Ryan Guillen of Rio Grande City, followed by Richard Peña Raymond of Laredo and Tracy King of Batesville, reflecting the more conservative leanings of voters in far South Texas compared to voters in the major metro urban areas.

Within the Democratic delegation there are 28 women (42%) and 39 men (58%). As a result, were women and men equally distributed among the most centrist and most liberal quartiles of the party, we would expect to see approximately 42% of each quartile accounted for by women. As the figure reveals however, that is not the case. There are no women within the most centrist quartile of Democrats. In sharp contrast, 71% of the Democrats in the party’s most liberal quartile are women.

In the 2018 election, Democrats won 12 House seats that had been held by Republicans during the 2017 legislative session. They won by margins ranging from 0.2% to 13.6%. Their margins of victory, followed by the margins between Democratic gubernatorial candidate Lupe Valdez and Republican Gov. Greg Abbott in the district, which range from -6.0% to 6.9%, are listed below:

From the day they arrived in Austin in January, many of these 12 legislators (especially those who won by the lowest margins and/or in whose districts statewide Republicans such as Abbott did well) have had targets on their backs, since these districts represent the Republican Party’s best prospects for flipping Democratic-held seats in 2020. One response by these 12 legislators to this threat in their first (tabula rasa) session in the Texas Legislature could have been to adopt centrist voting records on the House floor, following the successful model of Republican Sarah Davis, who has continuously won in a purple district by having a purple record.

These dozen Democratic legislators, however, have categorically rejected that option, with all 12 located to the left of the Democratic delegation’s median Lib-Con Score. A majority of these 12 Democrats have ideological positions that make them significantly more liberal than a substantial number of their 66 Democratic colleagues.

Far from displaying a centrist ideological profile, these potentially vulnerable Democrats behaved as unabashed liberals when casting votes during their first legislative session. Their liberal voting records should safeguard them against any serious Democratic primary challenge in March 2020, but do potentially put them at risk in the November 2020 general election — to the extent that district level forces, rather than those at the national or state level, drive voter behavior in their respective legislative districts.