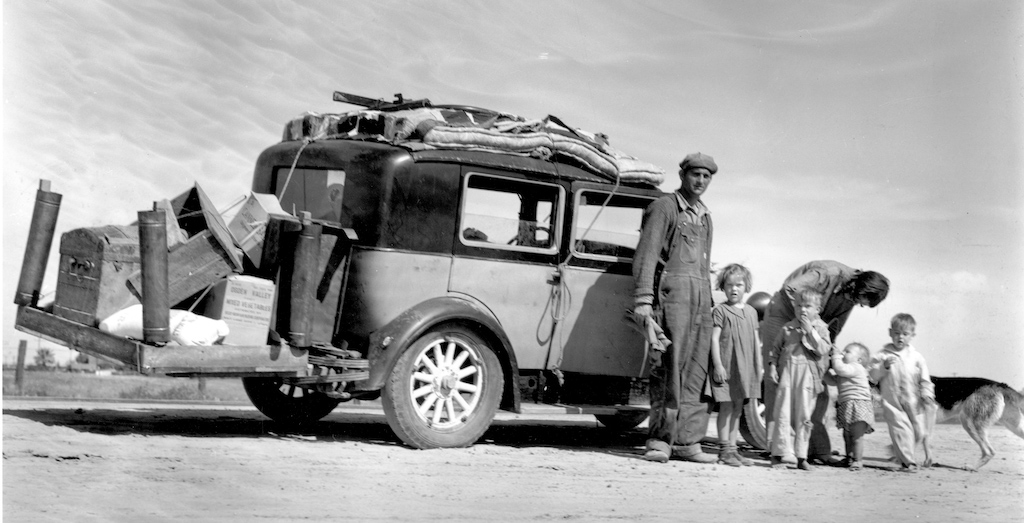 Photo by Dorothea Lange, Collection of Oakland Museum of California

Does this sound modern to you?

“There is trouble along the southern border — teeming hordes of unwashed indigents from distant places seeking asylum and entry into a better place. They have no papers, no property, and are little more than stateless refugees fleeing economic hardship and climate change. They come with whole families, including infants and small children, bringing nothing but the clothes on their backs. They have criminals among them, no doubt, and clearly threaten the public order. Local officials, outnumbered and overwhelmed, struggle to maintain good order, but seem unable to stem the tide of what increasingly looks like an invasion. Sterner measures may be required to deal with this crisis.”

Bad times along the Rio Grande, no?

Actually, no. I made it up. The particular indigent migrant incident I’m talking about occurred along the California border during the 1930’s, with a flashpoint focus on Barstow — midway between Las Vegas and Los Angeles. That’s when the nation fell victim to one of the early calamities of the climate change era: The Dust Bowl. The despised refugees in this case weren’t Spanish-speaking campesinos from Central America; they were Anglos from the central United States: Texas, Missouri, Oklahoma and Arkansas, known collectively as Okies. The Dust Bowl started in 1931, when a severe drought afflicted the High Plains of the Midwest and Upper South. By 1934, 75% of the nation was affected, and the agriculture-based economies of the farm belt collapsed. Faced with foreclosure, dispossession, and financial ruin, many its citizens pulled up stakes and moved out.

They moved to what seemed from a distance to be a promised land: California, with its scenic beaches, verdant valleys and majestic mountains. Thousands piled into ramshackle cars, trucks and vans, three generations deep, household goods on top, and wheeled their way onto Route 66, the Will Rogers Highway, to make their way west. And make their way they did, with little money, scant food, and nothing but hope and a belief in the essential goodness of their fellow man to sustain them.

Until they got to Barstow.

California was unsympathetic to the idea of absorbing tens of thousands of impoverished Midwesterners and Southerners, no matter what the cause. Until 1941, when the Supreme Court ruled that states couldn’t restrict interstate travel by the poor or any other Americans, states aggressively patrolled their borders. And this California did, in the person of Los Angeles Police Chief James Davis who in 1936 established the "Bum Blockade," a series of armed checkpoints along the state’s borders where would-be visitors lacking any visible means of support were turned back to where they came from. It’s worth noting that Chief Davis enjoyed widespread support for this public safety initiative, including that of the governor and virtually every major civic, business, newspaper and governmental entity in the state.

Nevertheless, thousands of Okies managed to get into California, some heading to the cities, while the rest flowed up into the Central Valley to take up agricultural work. Despite the inevitable conflicts, misunderstandings, prejudices and adjustment issues, these new Californians found work, established households, formed families and integrated successfully into the larger community of the state. They were there to help raise and harvest the state’s crops. They were there to man the defense plants set up during World War II. They were there to help create the California culture and economy that in their children’s and grandchildren’s times became one of the largest and most successful in the world, giving us, among other things, Hollywood, wind surfing, video games and the internet.

All of this should be seen in light of another 20th century immigration incident: The 1939 voyage of the St. Louis, a shipload of Jewish refugees denied entry into the U.S. because its manifest didn’t include an American port-of-call. The passengers of the St. Louis therefore lacked official sanction to disembark, and thus returned to Germany to face the Nazi Holocaust. At least a third died in the camps and many others simply disappeared. The St. Louis voyage of the damned remains one of the most tragic, unnecessary and enduring stains upon the American character.

There are already far too many stains on our national character: war, ethnic cleansing, genocide, slavery; it’s a long list and we needn’t add to it. With so many examples of displaced persons arriving at our shores  — and borders — penniless, and winding up in the top tiers of business, politics, culture and the professions, why wouldn’t we seize the opportunity to invite another wave of brave and determined immigrants into the national family?

Immigration is our story of origin, the heroic journey taken by our forebears, including those of the First Nations, whose ancestors had to cross the Bering Straits land bridge to get here. Immigration enlists all of the energy, imagination, and most of all, the courage and determination of those who undertake it when their present circumstances fall short.

Such people make the best kind of citizen candidates. None of us would be here without them.