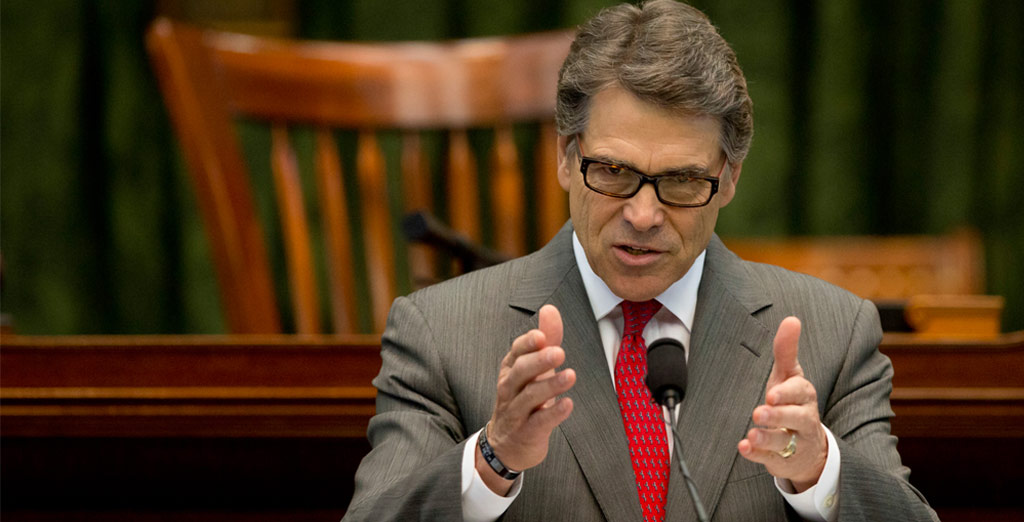 Rick Perry’s headline-grabbing decision to deploy 1,000 National Guard troops to the Rio Grande Valley in response to the recent surge of young migrants from Central America provides yet another in a long line of examples of the governor’s willingness and ability to strike a chord with conservative and Republican public opinion at the nexus of border security and immigration.

While he has repeatedly illustrated his ability to operate in this zone in state politics, this move marks a readjustment in tone aimed at a national audience, especially those attuned to the opening of the 2016 presidential race.

The symbolism of a military response to the border surge reflects the now-familiar patterns of public opinion in Texas. In the June 2014 University of Texas/Texas Tribune Poll, 51 percent of Republicans and 64 percent of Tea Party Republicans said immigration or border security was the most important problem facing the state. Perry’s push to secure the border — finally, according to many on the right — is squarely in line with public sentiment where it matters most for his future ambitions, and that sentiment was prevalent before the current mood of crisis: In the June 2013 UT/TT Poll, 46 percent of Republicans vouched for the importance of immigration and border security.

And if Texas seems like an outlier or overly punitive, Gallup has noted a similar trend nationally, with Republicans more likely to put an emphasis on border security than on dealing with immigrants already here. Other recent national polling from YouGov and The Huffington Post shows that a near-majority of Americans would immediately deport the children being detained at the border, including 68 percent of Republicans. If you’re of a boosterish mindset, consider it yet another way in which Texas is leading the nation.

The national resurfacing of immigration politics triggered by the refugee crisis, combined with these rooted public opinions, has put Perry in the curious but politically advantageous position of being one of the only politicians, Republican or otherwise, with the ability to deliver any kind of concrete response.

The governor’s action has, of course, not been universally applauded, to say the least. Some, like U.S. Rep. Joaquin Castro, D-San Antonio, say we should be sending the Red Cross to the border instead of National Guard troops. A near cacophony of voices can be heard raising concerns about the cost ($12 million a month), the effectiveness of putting more “boots on the ground” — as Attorney General Greg Abbott has put it — that are constitutionally limited from doing much of anything, and whether or not a military response is necessary for what some consider a humanitarian crisis.

But for Perry, there are likely only two sounds that matter: the boos emanating from a debate hall nearly three years ago during his first presidential run, when he called some Republican primary voters heartless, and the raucous events headlined by U.S. Sen. Ted Cruz attended by the very voters Perry hopes to capture in a 2016 run.

The situation at the border is very real, but as the old if undiplomatic political saw goes, never let a good crisis go to waste. While many are trying to take that adage to heart, Perry has singularly captured the moment by both counterpoising himself with President Obama and by climbing over rivals in the process. By meeting with Obama (not on the tarmac) on the president’s recent trip to Texas, Perry elevated himself into the national discussion while sucking the air out of a room filled with statewide Republican candidates looking to capture images of Obama looking helpless at the Texas-Mexico border.

Perhaps more telling than the political play with Obama was the fact that for the first time in recent memory, Perry has also one-upped Cruz. The junior senator stepped into the fray late last week, filing an alternative policy proposal that would address the crisis while taking a slap at Obama’s policy efforts. But the proposal was somewhat complicated and a little too subtle — uncharacteristically for Cruz. It turns out that 1,000 National Guard troops is a lot easier for both the public and the press to understand. (The rough measure of Google search volume illustrates the point. Cruz has achieved long-term parity with Perry in his short political career, but Perry has experienced a resurgence in recent weeks.)

The policy situation is fraught with complexity, while public attitudes are largely defined by partisanship. Given this volatile mixture, any analysis of Perry’s dispatching of the Guard that doesn’t take his political calculations into account, along with those of other actors in the crisis, seems woefully incomplete, at the very least, yet some observers are trying to do just that. Take, for example, a recent analysis that called the Obama administration’s linking of the crisis to its push for comprehensive immigration reform “slightly opportunistic” while concluding that Perry’s push for National Guard troops “isn’t unreasonable and is probably, in fact, a good idea.” That argument seems either determined to ignore the political context or oddly naive.

The border situation may be seen as many things at once — a humanitarian problem, a policy failure, a sudden reminder of the unpredictable nature of globalization for Americans inclined to withdraw from such complexities. Though it may be gauche to point it out, it is also an early reminder that Texas is already one of the stages upon which a very competitive contest for the 2016 GOP presidential nomination has begun to unfold.

Where are all the Latina Republicans?